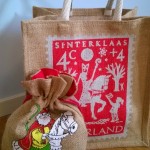 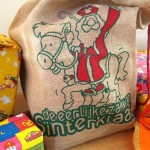 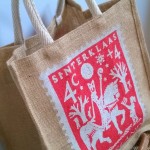 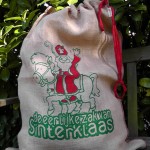 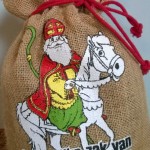 Do you know the history of father Christmas? His name is Santa Claus. That may give you a clue. It is a derivate from the name: Saint Nicholas, a very populair holy man in the Russian and other orthodox churches, but also the patron of seamen and the poor. His feastday is the sixth of December.

In the Netherlands his memory is celebrated as on the evening before by giving presents to family and friends. The children of course can meet the real Saint Nicholas: he rides on a white horse and wears the clothes of a Catholic Bishop.

Peters help him to miss nothing of the needs and deeds of the children and the grown ups. In a big book they write everything down and Saint Nicholas will reward the children that were brave or in need and be tough with those who caused trouble and grief.

In the Netherlands this tradition is very much alive and is celebrated by young and old. The grown ups make suprise wrappings and put their poetic skills to the test as you are expected to accompany your present with a story about the person who receives it in verse.

So the Dutch charity Pure Jute has proposed to make a statement with the sack that contains the presents: a real jute sack, honestly produced. Saint Nicholas can make a statement with his sack: with a funny and friendly picture the Sinterklaas (Dutch for Saint Nicholas) invites people tot think about the environment and to be aware that very cheap things often are produced to the detriment of nature, environment or people.

Be Pure Be Natural:
Lets work together for more justice in the world and invest in sustainability & ecology: 2gether for Nature.

You design it, we make it!

The products of Pure Jute can be customised for you. All requirements shall be discussed in close consultation with the customer and a product plan will be drawn up. It is all Pure Handicraft.